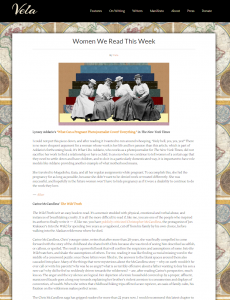 Women We Read This Week

The Wild Truth isn’t an easy book to read. It’s a memoir studded with physical, emotional and verbal abuse, and instances of breathtaking cruelty. It is all the more difficult to read if, like me, you are one of the people who inspired its author to finally write it — if, like me, you have publicly criticized Christopher McCandless, the protagonist of Jon Krakauer’s Into the Wild, for spending two years as a vagabond, cut off from his family by his own choice, before walking into the Alaskan wilderness where he died.

Carine McCandless, Chris’ younger sister, writes that after more than 20 years, she was finally compelled to come forward with the story of the childhood she shared with Chris because she was tired of seeing him described as selfish, or callous, or spoiled. The result is a powerful book that will confirm the suspicions and assumptions of some Into the Wild-watchers, and shake the assumptions of others. For me, reading it was like finding a crucial missing word in the middle of a crossword puzzle: once those letters were filled in, the answers to the blank spaces around them also cascaded into place. Many of the things that were mysterious about the McCandless story – why on earth wouldn’t he ever call or write his parents? why was he so angry? what is so terribly offensive about a father wanting to buy his son a new car? why did he feel so recklessly driven towards the wilderness? – are, after reading Carine’s perspective, much less so. The anger and the icy silence are logical. Her depiction of a toxic household covered up by a proper, affluent, manicured facade goes a long way towards explaining… See the complete story on VelaMag.com.