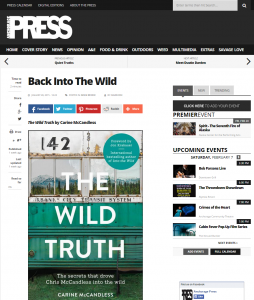 Back Into The Wild

Mention Jon Krakauer’s Into The Wild to most Alaskans and you’ll get more than a glint of recognition and invariably an opinion one way or the other on that unfortunate (or reckless) young man, Christopher McCandless, who starved to death in a bus near Denali Park.

In The Wild Truth, Carine McCandless, Christopher’s sister, tackles her brother’s death and their family dynamics, which ultimately propel both sister and brother on their own separate, yet intertwined quests. In the wake of Krakauer’s 1996 bestseller, her brother’s death was depicted by many the author interviewed as a result of the foolish behavior of a young, irresponsible man who got in over his head, dooming himself to a painful death by starvation. Some suspected mental illness. Carine refutes the notion that her brother was a flake with a death wish by providing ample evidence to the contrary. As she tells it, he was an extremely bright, disciplined individual who succeeded at everything he pursued. She points out he was captain of his high school cross country team, graduating from high school with straight As and honors from Emory University. Renowned for his intensity, he treated nothing lightly and was always amply prepared for any task at hand. What he could not adroitly manage was his dysfunctional family. Neither could Carine.

Their childhood was a nightmare replete with a bigamous, alcoholic father who beat his children while physically and verbally abusing their… See the complete story on AnchoragePress.com.