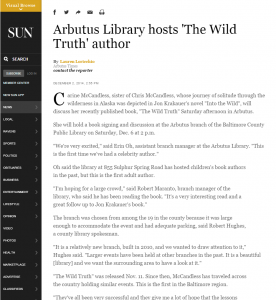 Carine McCandless, sister of Chris McCandless, whose journey of solitude through the wilderness in Alaska was depicted in Jon Krakauer’s novel “Into the Wild”, will discuss her recently published book, “The Wild Truth” Saturday afternoon in Arbutus.

She will hold a book signing and discussion at the Arbutus branch of the Baltimore County Public Library on Saturday, Dec. 6 at 2 p.m.

“We’re very excited,” said Erin Oh, assistant branch manager at the Arbutus Library. “This is the first time we’ve had a celebrity author.”

Oh said the library at 855 Sulphur Spring Road has hosted children’s book authors in the past, but this is the first adult author.

“I’m hoping for a large crowd,” said Robert Maranto, branch manager of the library, who said he has been reading the book. “It’s a very interesting read and a great follow up to Jon Krakauer’s book.”

The branch was chosen from among the 19 in the county because it was large enough to accommodate the event and had adequate parking, said Robert Hughes, a county library spokesman.

“It is a relatively new branch, built in 2010, and we wanted to draw attention to it,” Hughes said. “Larger events have been held at other branches in the past. It is a beautiful… See the complete story on BaltimoreSun.com.