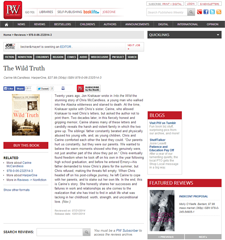 Twenty years ago, Jon Krakauer wrote in Into the Wild the stunning story of Chris McCandless, a young man who walked into the Alaska wilderness and starved to death. At the time, Krakauer spoke with Chris’s sister, Carine, who allowed Krakauer to read Chris’s letters, but asked the author not to print them. Two decades later, in this fiercely honest and gripping memoir, Carine shares many of these letters and candidly reveals the harsh and violent family in which the two grew up. The siblings’ father constantly berated and physically abused his young wife, and, as young children, Chris and Carine comforted each other the best they could. “Our parents hurt us constantly, but they were our parents. We wanted to believe the warm moments showed who they genuinely were, not just another part of the show they put on.” Chris eventually found freedom when he took off on his own in the year following high school graduation, and before he entered Emory—his father demanded to know Chris’s plans for the summer, but Chris refused, making the threats fell empty. When Chris headed off on his post-college journey, he left Carine to cope with her parents, and to stake out her own life. In the end, this is Carine’s story. She honestly shares her successes and failures in work and relationships as she comes to the realization that she has tried to find in adult life what was lacking in her childhood: worth, strength, and unconditional love. (Nov.)