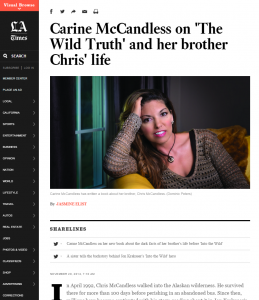 In April 1992, Chris McCandless walked into the Alaskan wilderness. He survived there for more than 100 days before perishing in an abandoned bus. Since then, millions have become captivated with his story, reading about it in Jon Krakauer’s iconic “Into the Wild” or watching it in Sean Penn’s film of the same name.

But more than 20 years after Chris’ body was discovered, readers and viewers still struggle to understand what motivated him to abandon his family and a life rooted in what appeared to be an idyllic home in the suburbs of Washington D.C., for the harsh wilderness of Alaska.

In “The Wild Truth” (HarperOne, $27.99), Chris’ sister, Carine McCandless, comes forward to set the record straight, revealing the much darker reality of Chris’ family life: a violent home in which their father beat and belittled their mother and where both parents manipulated the details of a second family.

Amid the many misconceptions of her brother, Carine speaks up to explain “that going into the wild was far from crazy; it was the sanest thing [Chris] could have done.”

We spoke by phone with the Virginia-based entrepreneur, activist and mother. McCandless will be discussing and signing her book at Book Soup in West Hollywood on Friday at 7 p.m.

It has been over two decades since your brother’s death. Why… See the complete story on LATimes.com.