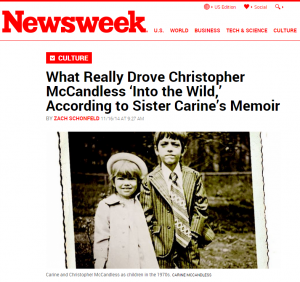 What Really Drove Christopher McCandless ‘Into the Wild,’ According to Sister Carine’s Memoir by Zack Schonfeld

Why did Christopher McCandless die?

The question still puzzles and haunts, even now, nearly two decades after Jon Krakauer detailed the Alaskan explorer’s doomed journey in Into the Wild. But there’s a slightly different one at the center of The Wild Truth, the new memoir by the late adventurer’s younger sister, Carine McCandless. What drove McCandless to up and leave his comfortable, upper-middle-class existence, abandoning his family for remote wilderness, in the first place?

The answer, McCandless suggests, has much to do with events that took place years before her brother’s 1990 severing of ties and 1992 death. The Wild Truth chronicles a childhood marked by domestic violence at the hands of an abusive father and an enabling mother, and by doing so, it offers a poignant look at Christopher McCandless’s life and death from the person who knew and understood him the most. The author kept these details private for decades—even as Into the Wild was turned into a major 2007 film—but “I found my voice through this process,” McCandless told Newsweek. “I really want this book to help other people find their voice.”

This interview has been lightly condensed for clarity and length.

It’s been more than 20 years since Chris’s death. Why now? Why is… See the complete story on Newsweek.com.