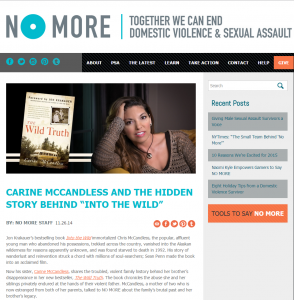 Carine McCandless and the Hidden Story Behind “Into the Wild”

Jon Krakauer’s bestselling book Into the Wild immortalized Chris McCandless, the popular, affluent young man who abandoned his possessions, trekked across the country, vanished into the Alaskan wilderness for reasons apparently unknown, and was found starved to death in 1992. His story of wanderlust and reinvention struck a chord with millions of soul-searchers; Sean Penn made the book into an acclaimed film.

Now his sister, Carine McCandless, shares the troubled, violent family history behind her brother’s disappearance in her new bestseller, The Wild Truth. The book chronicles the abuse she and her siblings privately endured at the hands of their violent father. McCandless, a mother of two who is now estranged from both of her parents, talked to NO MORE about the family’s brutal past and her brother’s legacy.

What was it like to write a book that details such a painful family history?

At first I chose not to live in the past, and I felt that I couldn’t revisit it. But it was exactly what I needed to do. I understand why people suffer in silence. It took me 20 years to write this book. My mother used to talk to me throughout my teenage years about how she wanted to be a voice for battered women and children. In our situation, my mother was the primary target [by my father], but over time she became his accomplice, and she got accustomed to a certain lifestyle financially as well. My mom wasn’t able to get herself or… See the complete story on NoMore.org.